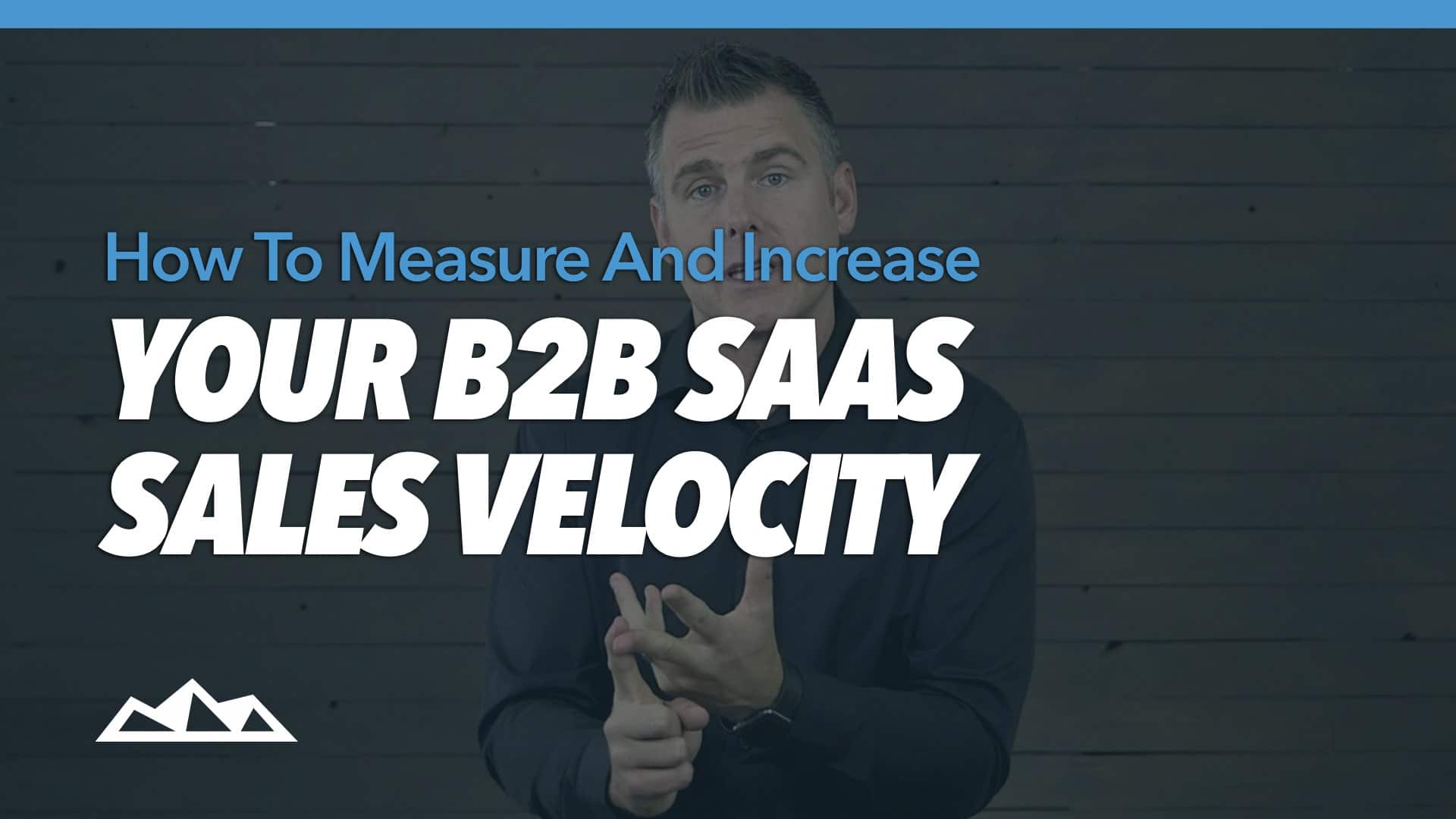 Both have engines. Both have 4 wheels. Both are technically “cars”.

So what accounts for the difference in velocity?

The Mclaren F1 is engineered for speed. While the Camry is happy to just cruise along.

The same can be said about your B2B sales process.

… while others boast a speed velocity that allows them to scale 10x that – fast.

In this weeks’ video, I talk about the 5 steps that fuel your speed velocity — allowing you to close bigger deals, faster… and engineer record-breaking revenue numbers month after month.

At a high level, here’s how to engineer your way to a higher sales velocity:

Of course, it all starts with measuring your velocity. (Pearson’s law for the win) 😉

If you don’t know it (no judging)…

…  I give you the quick and dirty formula in the video.

From there, you can start pulling the other 4 “levers” to predictably engineer a faster sales velocity, and blow past your previous MRR record.

Mclaren F1 or a Camry.

Watch the video and then drop me a comment letting me know what your sales velocity currently clocks in at, and what steps you plan to implement right away to close bigger deals faster.

What follows below is a lightly edited transcript of the video.

Dan: Hey there. I’m Dan Martell, technology entrepreneur, investor, and creator of SaaS Academy. In this video, I’m going to share with you a strategy to increase your SaaS sales velocity without adding any new reps and be sure to stay at the end. We’re going to share with you an exclusive resource called the rocket demo builder goes over my five principles to close more deals and the nine steps they’re going to need to follow to make that happen.

Dan: Maybe you’re doing all the demos today or you’ve got a team of reps that are working with your potential customers and they’re just not performing really well and you’re frustrated because it’s costing you money and obviously lost opportunity and what you want is essentially a process for bringing on a new sales rep on your sales team to get them to close faster, to get the deals to get bigger, to essentially increase the total net new MRR, monthly recurring revenue you’re adding to the bottom line. You see, when I was starting my company Flowtown, we hired our first couple reps. that was always the challenge. As a founder, I could communicate, sell and do really well, but as soon as I had to have other people involved in that process, it got really challenging. So what I needed to figure out for myself is how do I measure things? How do I get clear on the specific outcomes I want for my sales reps and my sales process and really move that forward?

Dan: And these are the five things you need to do to increase your sales velocity.

Dan: 1. Measure your sales velocity, it’s a really simple formula. Get out a pencil and a pen and I’ll walk you through it. Number one, we need to figure out, uh, what is the number of leads that we’re actually generating on a 30 day window. Once we have that, then we want to figure out what our conversion to close rate is or what’s called the win rate of our deals. Multiply that by the number of leads. And then finally multiply that by the average deal size. Once you have it, then divide those three numbers by the average days to close a deal. And that will give you your sales velocity rate. This is the number one sales metrics you should be measuring for your SaaS business.

Dan: 2. Increase the quality of your leads. Now if you’ve already mapped out that formula and you know kind of where the leads are, then it’s all about improving the quality.

Dan: So the first thing I’m going to suggest is to sit down with your marketing team and really get clear and defined on what’s considered an MQL or what’s called a Marketing Qualified Lead. The other thing you could do is talk to them about introducing lead scoring so that you only get certain opportunities are actually highly qualified in the market eager to potentially buy your product. Other things you can do is account based marketing list, so essentially being very deliberate on targeting specific companies that you want to work with. And then for me, finally it’s installing marketing automation because I believe that you should have your marketing take care of the market till they’re ready to buy.

Dan: 3. Grow your deal size. Now, this is probably the biggest opportunity for most of you watching this. As you’re doing demos, you’re talking to customers, you want to look for opportunities to upsell and cross sell.

Dan: Those are pretty traditional things, but is your pricing optimized? Just think about the way you’re doing valleys. Are you pricing based on a value driver and how your customer’s gonna use the product? Do you position your product appropriately for the value proposition that you drive theirs? And every industry has a different kind of need that if you can actually use that industry in vertical information to um, customize the presentation, you can drive up the deal size just by showing other customers that have bought more and got a lot of success with your product. And finally, I would say just team training. At the end of the day, if your team doesn’t know how to deal with objections and negotiate deals, um, present properly, then you’re always gonna have a challenge around growing the average deal size.

Dan: 4. Decrease your sales cycle. When it comes to looking at the speed of the sales cycle, you need to map it out.

Dan: You need to break it down step by step. Some clients that I coach, I recommend doing this in a Trello or just on a big whiteboard and just walk through the whole sales process. Who’s involved, what are the different steps, the decision makers, etc., I teach a framework in my rocket demo called the virtual close to understand who’s involved in actually making a decision within an organization. But, um, there’s a ton of different techniques to increase the sales velocity. One of my favorite that I recently learned from my friend Michael Litt, the CEO and founder of vidyard, was that they have this motto amongst their sales reps is essentially make more friends within the organization. If a deal doesn’t have enough context assigned to it, the manager will just say, make more friends and that’ll help you increase, you know, the champions, the decision makers, the influence your product has within an organization and will obviously improve your sales velocity and reduce your sales cycle length.

Dan: 5. Know your numbers. As I mentioned, you need to map it out, you need to break it down, but more importantly, you need to understand the whole pipeline. And that’s everything from even measuring sales velocity. When I sit down with clients, like sometimes they’re struggling just to get those numbers. They don’t know what their close rate or their win rate is. They don’t understand how to measure the average deal size or average deal value or they’re not measuring it appropriately. So really important to map it out, understand your numbers and really look at the industry best practices, the vertical that you’re in, the kind of product that you sell in the companies you serve, what are their numbers based on where you’re at so you can benchmark and ensure that you’re focusing on improving the right part of the funnel because there is a point of diminishing returns.

Dan: So the key area is to know your numbers, map it to industry best practices, and then focus on your least performing a process in that pipeline to increase the overall sales velocity, the one sales metric which tells you how your sales team is performing.

Dan: Five, Know your numbers. As I mentioned in this video, I want to share an exclusive download with you. It’s called the Rocket Demo Builder™. I go over the five principles that you need to understand to really close bigger deals faster, specifically the 10 80 10 principle, as well as the virtual close strategy. And I even give you the nine step, workflow for you to customize the rocket demo for your specific situation, it had helped my clients who had a longer sales cycle to close faster.