The Right Way To Go From Services To SaaS 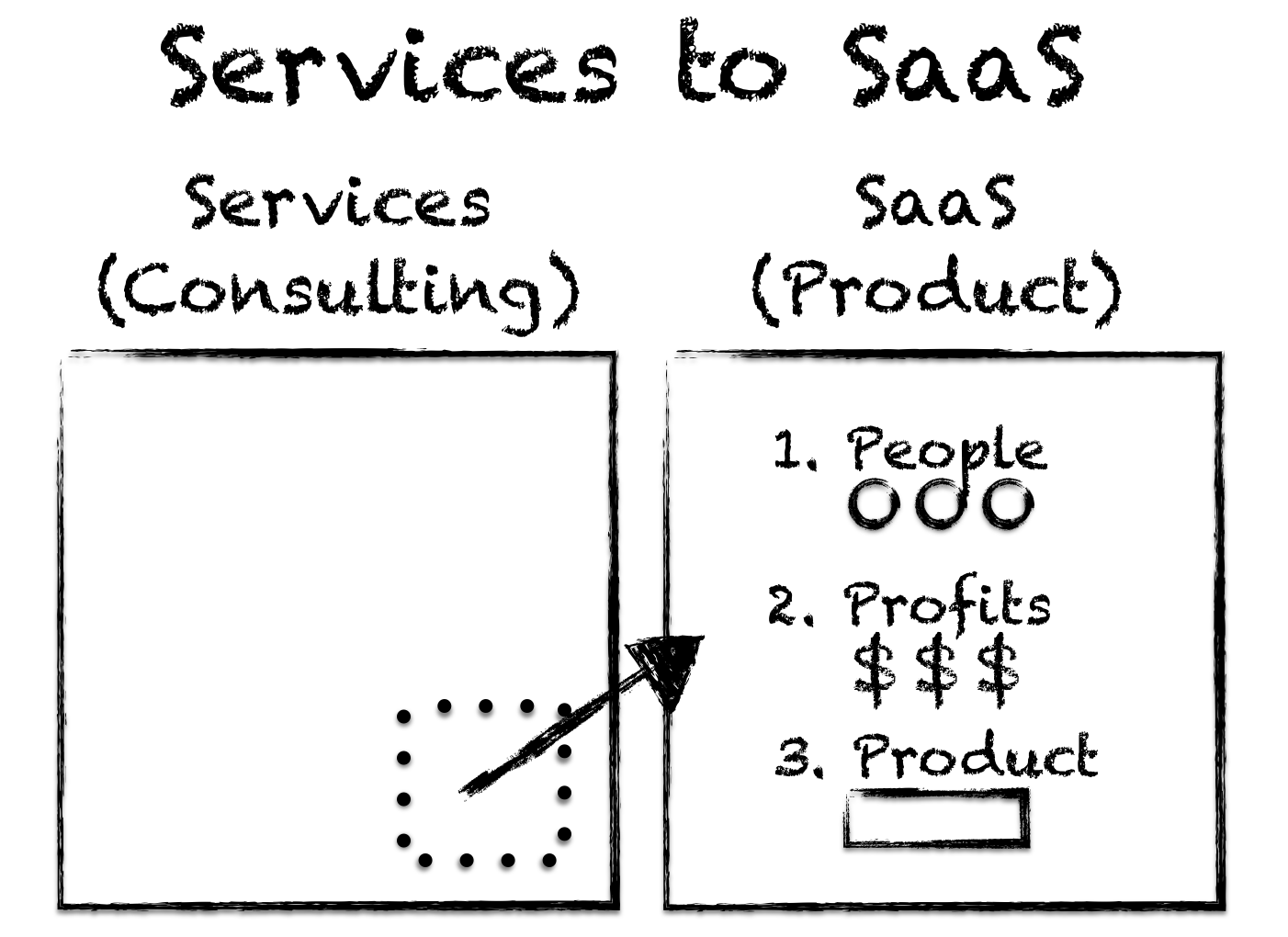 “How do you build a product company within a service company?” …is a question that a lot of people struggle with.

There are amazing examples of companies who have started off as a consulting or service company who have gone on to launch great products.

Hootsuite: which was built out of Memelabs to help deliver their marketing services

Shopify: which started off as a snowboard e-commerce site and recently went public

Freshbooks: who initially were a marketing analytics/marketing automation company for small businesses who realized that invoicing their customers was a real pain in the butt- so they built this great product

If you’ve tried to do this, you’ll understand… the challenge is:

I went through this when I was building Spheric.

… also, it’s not repeatable and it doesn’t scale (you’re always trying to get the next client to fill up the hours or get new projects).

I think it’s just a natural human instinct that when something isn’t going well (ie. you’re running out of money, you realize that your cash is running low or you have a demand that you can’t deal with), that it’s very easy to say, “Hey, I know we’re working on this product, but let’s shift it back to working with the customer.”

… and then the product gets put on the back burner.

So I’m going to suggest that for step 1, you take the resources (team) and put it outside of the business and really treat it like a separate entity. 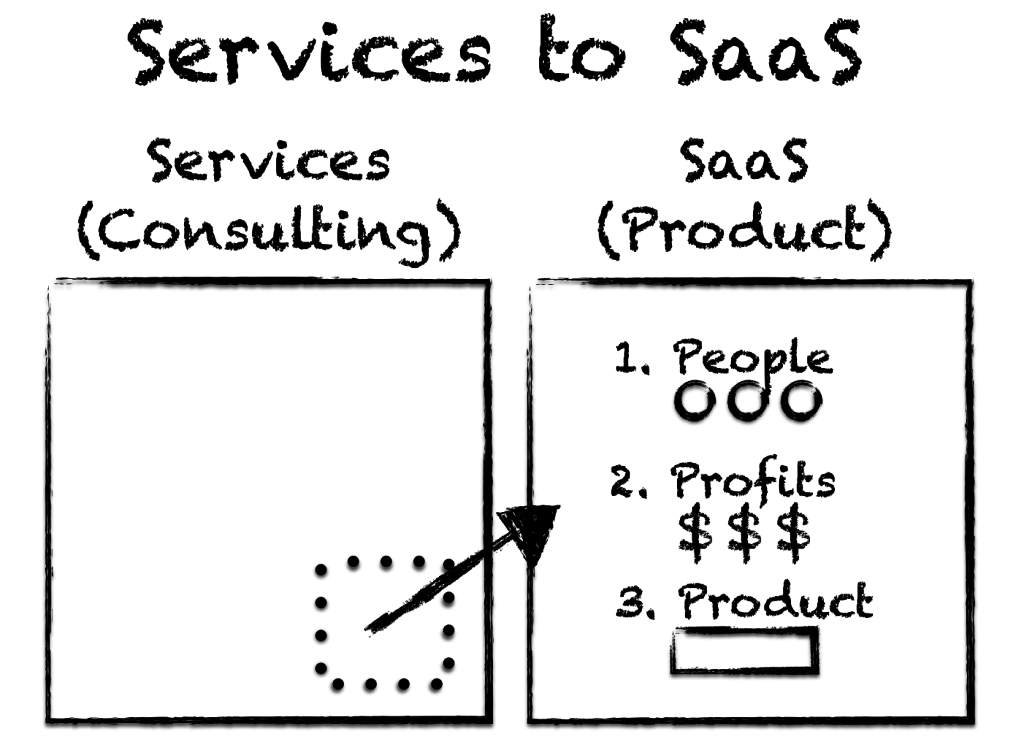 For example, you can hire a new person and fund it from the profits from your service company or you can take somebody from your team and start building out that capacity. You can start out as simple as with one person.

I think 37signals is a great example of this, they hired DHH as a contractor to work 10 hours a week to build Basecamp – even though they were working with customers full time.

They wanted to build the tool for themselves, thought there was a need for other people to use it and then had DHH build it part time while they were working with them.

That to me is a really good way to keep the new product and the new entity “clean.”

Dealing With Partners: How To Split Equity When It Comes to Cash and Time

The other challenge that I’ve seen a lot of times is when you have multiple founders in the service company but only one goes off to work on the product.

If you go off and start putting all of your time and energy 100% into the product and the way you’ve structured it was that the service company owned the product (because the service company financed it through its profits), then it’s this really weird situation where you have partners in the business who aren’t active in the business, who aren’t really responsible for the success of the product and who are MAJOR shareholders.

This is an issue because you won’t have the equity to compensate the rest of the team who deserve it, and if you’re the person running the product you’ll grow resentful towards your previous partners for owning such a disproportionate percentage of the new product.

So that’s why I always suggest to start clean. It’ll help you avoid those issues.

Because truly that’s what it is! You’ve got profit, you’ve got cash and you’re putting it into another entity as an investment.

Every road dilutes 20% of the companies equity, so if the service company makes itself the size of a multiple stage VC (or more), then there will never be any more room for new investors.

So give yourself (the service company) an extra boost in equity by doing it at a low valuation (for example, $1,000,000 seems about fair), and then that way the cap table is really clean for new investors.

The service company essentially has an equity stake in this new product company at that valuation.

Now that may not seem like very much because a lot of people might be co-founders in a service company and think, “It wouldn’t even exist if it wasn’t for my idea!”

But trust me, if you’ve been building companies for a while, you KNOW that it’s never the initial idea…

… it’s the initial team that makes it successful.

It’s continuously investing time and overcoming obstacles that is going to be the reason it’s successful – not the initial idea or capital.

What this allows you to do is give the person running the company enough equity in the cap table (the way that you give away shares) so that you can incentivize to build a team.

Again, I’ve seen this happen so many times!

I’ve actually invested in a company recently that was spun out of a service company.

When I first looked at it, I looked at their cap table – and the service company owned 70% of this new product!

Right off the bat you have 70% ownership of the company owned by a small group of people – so you don’t have enough equity in the company to even incentivize the CEO or other key team members long term.

After sharing my thoughts on the matter the founders restructured the team, their approach and commitment to the company and I eventually invested.

If you’re building a venture backed company that’s going to grow to $100M a year revenue in the next 7 years (because that’s what you’re supposed to be aiming for), then there’s no way you’ll have the cap table structure to win.

It’ll be like walking around with lead on your feet.

In Summary: Keep It Clean

So that’s the overall structure.

Spin it out, keep it clean, take the money from the service company, invest it in the product company.

Build a new team if possible (so you’re not pulling that team back in to other client work) and really allow it to thrive and grow.

By all means, if there are opportunities to refer customers to the product, help them out, or give any other resources, etc. you want to do that because you have a vested interested in seeing it be successful.

Setting the product company up this way will give it the best chance, although it doesn’t guarantee anything (because no startup is guaranteed!).

This will also allow you to build a structure to grow and eventually raise venture capital (if you want), and build a really cool, meaningful company.

So that’s my framework for when people ask me how to build a product company within a service company. It’s the structure and approach I suggest because it’s the one that’s going to set you up to succeed.

Even if your goal is to eventually wind the company down or sell it so you can work on the product full time – it’s still the way you want to do it – then it’s just a decision as to where you spend your time long term.

I hope you found this helpful, it was a really great question and one that I know a lot of people struggle with. I know I struggled with it (I did it wrong!) and I’ve since seen really great examples of companies who do it amazingly, which is why I wanted to share it with you!