3 Responsibilities of a Startup CEO 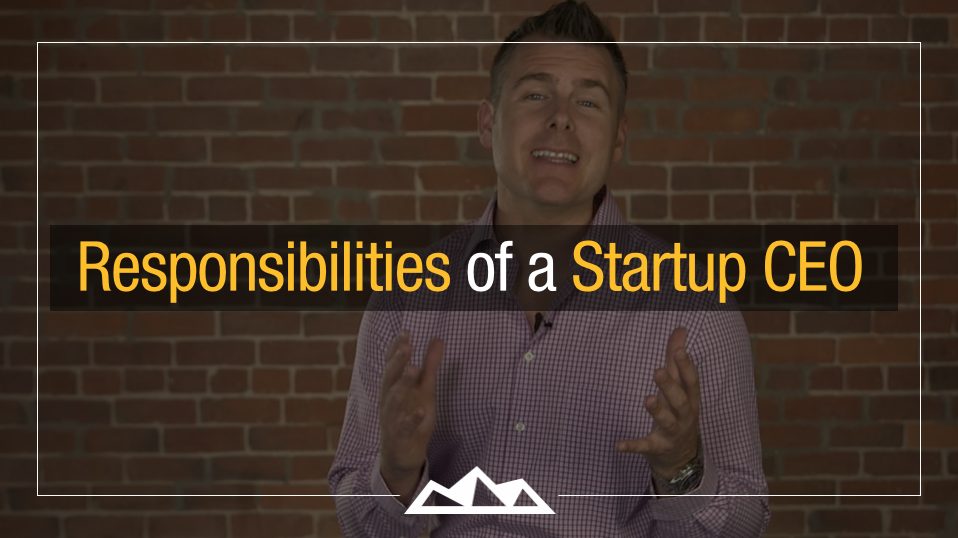 When I started my first company (MaritimeVacation.ca) at 17 I had no clue what I was suppose to be doing.

I didn’t know if I should be coding or selling?

As the “CEO” what should I be focusing my time on?

In lieu of knowing the answer, I just built stuff.

It’s definitely the reason that company (and the next one) failed.

It wasn’t until 10 years later after reading 100’s of business books and getting great advice from mentors and advisors that I crystallized what my role was.

I learned it came down to 3 key responsibilities.

If you can become great at these 3 areas you’ll become an extremely successful startup CEO.

Miss one and you’ll just make it so much harder on yourself.

One of them is so simple, yet I feel like most people forget that it’s the basis of any great business.

Can you guess which one I’m talking about?

Leave your answer as a comment below. I read and reply to each one of them.

Don’t wait 10 years to learn this… once you do, you’ll have a CLEAR plan for each an every day.

What follows below is a lightly edited transcript of the video.

Dan: The responsibility of a startup CEO. You know, I get asked that question all the time and I was recently talking with some friends and they were wondering like, you know, okay now that I have a team, what is my responsibility as CEO? Because a lot of them are still coding or designing or doing kind of busy work. But when it comes to being the CEO, especially if you raise money from venture capitalist, you need to figure out what is my responsibility. That’s why I want to share with you guys today is the three things that make great CEOs and really the responsibilities of the founders.

Dan: Number one is to set the vision. Think about where the company’s going. You know, when people come to work they want to have a sense of future state. You know, I always kind of try to paint people the picture, not what we’re doing today because we can kind of project out what does the rest of the day or the week look like.

Dan: But how does this look like in three to five years or even 20 years? What is our mission for this company and as the founder and CEO, your responsibility is actually to not only paint that mission and the set the vision, but it’s also to remind people and trust me, you’re going to feel like there’s sometimes where you’re explaining yourself over and over and you’re like saying this almost on a daily basis, if not several times of day, but that’s actually your job. That is what founders and CEOs do. They carry that mission and that vision forward. They remind people, they tie what they’re working on back to that mission and that is, that is what they do all day. It’s a communication strategy, It’s a leadership strategy and that is the first, you know, the responsibility of a CEO.

Dan: The second, the most important, the one that will kill you is don’t run out of money right?

Dan: It may sound crazy to think, okay, of course, no, don’t run out of money because if you do, you have no business. But think about this. If you’re, if you’re on the venture path, and that’s the one I’ve known recently. You know, I’ve recently, I recently sold my last company clarity, but I’ve done two venture back companies. And what I’ve learned is the role of a venture backed CEO is to not run out of money. It’s to figure out how much capital do you have left in your bank account and when should you start raising your next round of funding. Bad CEOs, ones that don’t take this into considerations are the ones that wait two to three months before they run out of money to start the process. It’s at least a six to nine month process prior to when you need it. You know, so running out of money or resources.

Dan: So think about your team needs resources. They might need contractors, they might need server capacity, they may need design support or feedback, but whatever resource or need they have, including capital, that is your responsibility to make sure it’s topped up, that everybody has access to it so they know how to use it and that they don’t run out. So that’s the second thing.

Dan: The third thing is to hire great people. You know, it may sound crazy, but those are really, truly the three things is to make sure you set the vision. You don’t run out of money and hire amazingly great people. This is the area, the people part that I spent probably 70% of my time on because to me it’s an ongoing thing. As you’re building a business, you don’t, you don’t know when you’re going to need to hire five great developer, designers, BD specialists, marketing experts, so what you’re always doing as part of your daily routine is always trying to meet new people, get introduced to high caliber talent.

Dan: You know, contractors that eventually may be part of your team, but whatever it is, 70% for me anyways, that’s the way I look at it. Especially if you again venture back, you have a good core team. You need to be continuously looking for new talent and then recruiting that talent and most people at a high performing team, the people you hire don’t need a job. They’re probably working somewheres and your responsibility, your goal is to try to convince them to either leave that position and join you or if they’re working on their own startup, and this has happened in many times, most of them, I’d say half of the people I hire actually are working on their own companies, is putting their projects on hold so they can come to join our mission and our vision for the next two to three, maybe four years if you’re lucky, but having A-players and making sure that you continuously, you know, if people aren’t performing, they’re not a good fit.

Dan: Get them off the team. If you need more people, have them queued up, have them ready to join the team. Those are the three areas. Again, it’s set the vision. Don’t run out of money and hire really great people. That’s the responsibility of a startup CEO and I want to share that with you guys quickly. I would invite you to like this video and leave a comment below. Let me know if you have any other tips for founders, CEO’s, or if you’ve struggled with anything and overcome it, what were your solutions to that? I want to challenge you to live a bigger life and a bigger business, and I’ll see you guys next Monday.